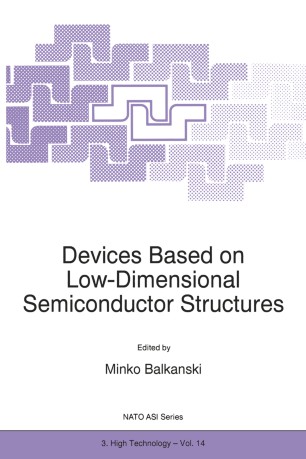 Devices Based on Low-Dimensional Semiconductor Structures

Low-dimensional semiconductor quantum structures are a major, high-technological development that has a considerable industrial potential. The field is developing extremely rapidly and the present book represents a timely guide to the latest developments in device technology, fundamental properties, and some remarkable applications. The content is largely tutorial, and the book could be used as a textbook.
The book deals with the physics, fabrication, characteristics and performance of devices based on low-dimensional semiconductor structures. It opens with fabrication procedures. The fundamentals of quantum structures and electro-optical devices are dealt with extensively. Nonlinear optical devices are discussed from the point of view of physics and applications of exciton saturation in MQW structures. Waveguide-based devices are also described in terms of linear and nonlinear coupling. The basics of pseudomorphic HEMT technology, device physics and materials layer design are presented. Each aspect is reviewed from the elementary basics up to the latest developments.
Audience: Undergraduates in electrical engineering, graduates in physics and engineering schools. Useful for active scientists and engineers wishing to update their knowledge and understanding of recent developments.