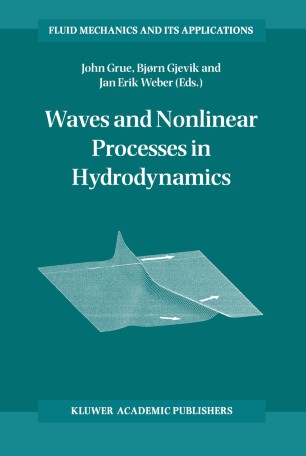 Waves and Nonlinear Processes in Hydrodynamics

Part of the Fluid Mechanics and Its Applications book series (FMIA, volume 34)

In December 1994 Professor Enok Palm celebrated his 70th birthday and retired after more than forty years of service at the University of Oslo. In view of his outstanding achievements as teacher and scientist a symposium entitled "Waves and Nonlinear Processes in Hydrodynamics" was held in his honour from the 17th to the 19th November 1994 in the locations of The Norwegian Academy of Science and Letters in Oslo. The topics of the symposium were chosen to cover Enok's broad range of scientific work, interests and accomplishments: Marine hydrodynamics, nonlinear wave theory, nonlinear stability, thermal convection and geophys­ ical fluid dynamics, starting with Enok's present activity, ending with the field where he began his career. This order was followed in the symposium program. The symposium had two opening lectures. The first looked back on the history of hydrodynamic research at the University of Oslo. The second focused on applications of hydrodynamics in the offshore industry today.