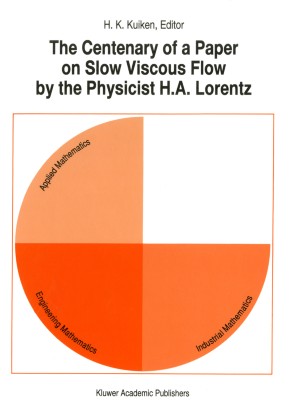 The Centenary of a Paper on Slow Viscous Flow by the Physicist H.A. Lorentz

This book commemorates the appearance one hundred years ago of a paper on slow viscous flow, written by the physicist and Nobel laureate H.A. Lorentz. Although Lorentz is not remembered by most as a fluid dynamicist - indeed, his fame rests primarily on his contributions to the theory of electrons, electrodynamics and early developments in relativity - his fluid-mechanics paper of 1896 contains many ideas which have remained important in fluid mechanics to this very day. In that short paper he put forward his reciprocal theorem (an integral-equation formulation which is used extensively nowadays in boundary-element calculations) and his reflection theorem. Furthermore, he must be credited with the invention of the stokeslet.
The contributors to this book have all made their mark in slow viscous flow. Each of these authors highlights further developments of one of Lorentz's ideas. There are applications in sintering, micropolar fluids, bubbles, locomotion of microorganisms, non-Newtonian fluids, drag calculations, etc. Other contributions are of a more theoretical nature, such as the flow due to an array of stokeslets, the interaction between a drop and a particle, the interaction of a particle and a vortex, the reflection theorem for other geometries, a disk moving along a wall and a higher-order investigation.
Lorentz's paper of 1896 is also included in an English translation. An introductory paper puts Lorentz's work in fluid mechanics in a wider perspective. His other great venture in fluid mechanics - his theoretical modelling on the enclosure of the Zuyderzee - is also discussed. The introduction also presents a short description of Lorentz's life and times. It was Albert Einstein who said of Lorentz that he was `...the greatest and noblest man of our time'.