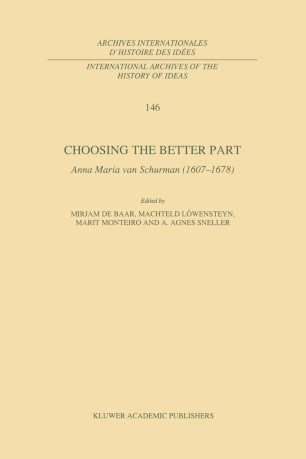 Anna Maria van Schurman was in more than one aspect an unconventional woman in her own lifetime. As a gifted scholar in many foreign and ancient languages, as well as in philosophy and theology, she corresponded with other learned men and women all over Europe. She achieved international renown for her own defence of scholarly activity of women. Life and work of this Dutch femme savante of the 17th Century has thus far been studied by theologians, philosophers, literary scholars, historians, pedagogues and art historians, each concentrating on specific aspects of Van Schurman's biography or work. A rather fragmented image of this scholar was the result.
This interdependent collection of essays describes the life and work of Anna Maria van Schurman from an interdisciplinary - or rather multidisciplinary - approach and will outline a more integrated yet at the same time subtly differentiated picture. Nine contributions - from the disciplines of philosophy, theology, Dutch language and literature, intellectual and art history, and women's studies - partly based on new source material, shed light on Van Schurman's ideas on erudition and femininity, ethics and philosophy, as well as on her religious beliefs, within the context of the early modern intellectual community to which she belonged.
Audience: This collection of essays will therefore command the interest not only of historians, but also of scholars and students in theology, philosophy, art history, and women's studies.