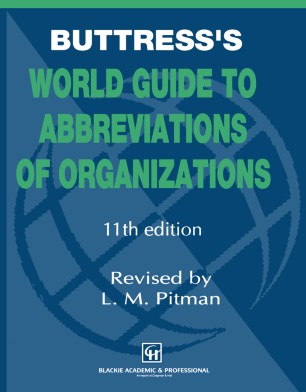 The previous edition of this directory extended its coverage of the Far East, Australasia and Latin America, areas previously under-represented. For this new edition emphasis has been given to increasing the number of entries for organizations from Britain, the United States and Australia, and particular attention has been paid to new political organizations in Central and Eastern Europe and the former Soviet Union. The number of entries included has gone up to over 68,000 of which over 9,000 are new or amended. Cross-references from defunct organizations in the previous edition have been deleted, and references (indicated by ex and now) added for organizations which have changed their name since the previous edition. As before, the range of organizations included is broad and only purely local organizations have been excluded. This directory therefore lists official and unofficial organizations, national and international, on all SUbjects: political, economic and social. Acronyms of parent bodies of subsidiary organizations are given where appropriate and equivalencies are used to link acronyms in different languages for the same organization. Further information about the organizations listed can be found in the sources listed in the bibliography. I would like to thank Henry Heaney and Graeme Mackintosh for their advice, and David Grinyer for his technical support. L. M. Pitman Bibliography Adams, R. (ed.) (1993) Centres & Bureaux: A Directory of UK Concentrations of Effort. Information and Expertise, 2nd edn, CBD Research, Beckenham. Barrett, lK. (1993) Encyclopedia of Women's Associations Worldwide, Gale, London.