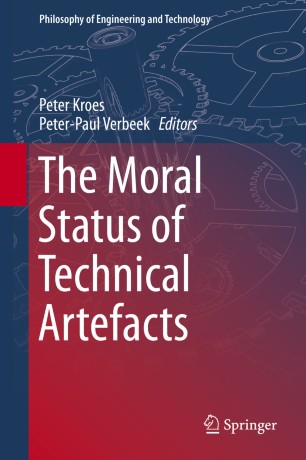 The Moral Status of Technical Artefacts

Part of the Philosophy of Engineering and Technology book series (POET, volume 17)

This book considers the question: to what extent does it make sense to qualify technical artefacts as moral entities? The authors’ contributions trace recent proposals and topics including instrumental and non-instrumental values of artefacts, agency and artefactual agency, values in and around technologies, and the moral significance of technology.

The editors’ introduction explains that as ‘agents’ rather than simply passive instruments, technical artefacts may actively influence their users, changing the way they perceive the world, the way they act in the world and the way they interact with each other.

This volume features the work of various experts from around the world, representing a variety of positions on the topic. Contributions explore the contested discourse on agency in humans and artefacts, defend the Value Neutrality Thesis by arguing that technological artefacts do not contain, have or exhibit values, or argue that moral agency involves both human and non-human elements.

The book also investigates technological fields that are subject to negative moral valuations due to the harmful effects of some of their products. It includes an analysis of some difficulties arising in Artificial Intelligence and an exploration of values in Chemistry and in Engineering. The Moral Status of Technical Artefacts is an advanced exploration of the various dimensions of the relations between technology and morality.