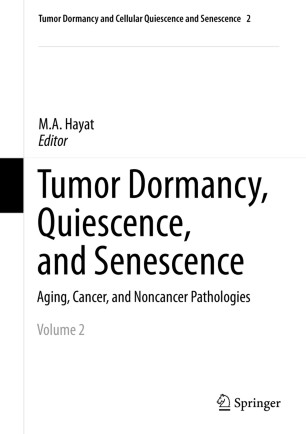 In this second volume in the series exploring Tumor Dormancy, Quiescence, and Cellular Senescence, discussion is focused on the role of tumor dormancy in diseases such as breast cancer, melanoma, prostate cancer, liver cancer and lung cancer. M. A. Hayat, the series editor, writes in the preface that little is known of factors regulating the transition of residual cancer into a dormant state or the subsequent reinitiation of growth. A majority of us, he says, have in situ tumors that may remain dormant or may progress into a lethal form of cancer; the former are prevented from recruiting their own blood supply.

Section I covers Molecular Mechanisms, with chapters on the role of NAE inhibitor MLN4924; oncogene-induced senescence; the role played by mitogen-activated protein kinase in the induction of cellular senescence; mechanisms of premature cell senescence and other topics. Section II examines Tumor and Cancer, discussing defects in chromatin structure and diseases; the role of fibrosis in tumor progression and the dormant to proliferative switch; the function of ING proteins in cancer and senescence and more. The final section is devoted to Stem Cells and Cancer Stem Cells, featuring chapters showing that senescent-derived pluripotent stem cells are able to redifferentiate into fully rejuvenated cells; that the transcription factor Gata2 regulates quiescence in haematopoietic stem and progenitor cells; and discussing dormancy and recurrence of cancer stem cells in bone.

The contributors point out that the quiescent state regulates hematopoietic stem cells and muscle stem cells, and detail the role of kinase in the mediation of reversible quiescent state in a subset of ovarian, pancreatic, and colon cancers. Molecular mechanisms underlying stress-induced cellular senescence and accumulation of reactive oxygen species and induction of premature senescence are also presented. Discussion includes the important role of microRNAs in oxidative stress-induced apoptosis and senescence and the effect of microRNA as a modulator of cell proliferation in lung cancer. The book includes an explanation of the suppression of cellular senescence in glioblastoma brain tumor.

Taking a broad and varied perspective, this volume was written by 70 contributors representing 11 countries.