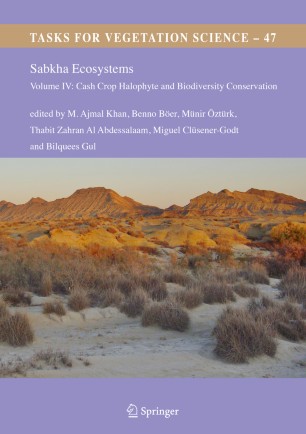 This is the fourth volume of the sabkha ecosystem series in Tasks for Vegetation Science. More than ten years have passed since the publication of the first volume, dealing with the Arabian Peninsula and adjacent countries. Volume two provided information on West and Central Asia, volume three on Africa and Southern Europe, where a lack of scientific capacity in this specialized field of saline dry lands was noticed. This is why volume three was comparatively thin. For the current volume however, we had almost thirty contributions, highlighting the importance of halophyte research and development, with a view to establishing pilot-farms, for food production, biofuel, analyzing atmospheric carbon sequestration, and also as places for ex situ halophyte biodiversity conservation. Two more volumes are planned, one on the sabkha ecosystems of the Americas and another one on Asia-Pacific, to conclude the global geographical coverage.