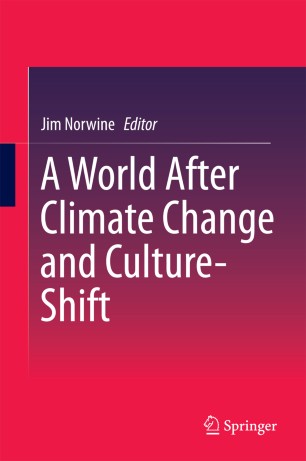 A World After Climate Change and Culture-Shift

In this book, an international team of environmental and social scientists explain two powerful current change-engines and how their effects, and our responses to them, will transform Earth and humankind into the 22nd-century (c.2100).

This book begins by detailing the current state of knowledge about these two ongoing, accelerating and potentially world-transforming changes: climate change, in the form of global warming, and a profound emerging shift of normative cultural condition toward the assumptions and values often associated with so-called postmodernity, such as tolerance, diversity, self-referentiality, and dubiety replaced with certainty. Next, the contributors imagine, explain and debate the most likely consequent transformations of human and natural ecologies and economies that will take place by the end of the 21st-century.

In 16 compellingly original, provocative and readable chapters, A World after Climate Change and Culture-Shift presents a one-of-a-kind vision of our current age as a “hinge” or axial century, one driven by the most radical combined change of nature and culture since the rise of agriculture at the end of the last Ice Age some 10 millennia ago. This book is highly recommended to scholars and students of the environmental and social sciences, as well as to all readers interested in how changes in nature and culture will work together to reshape our world and ourselves.