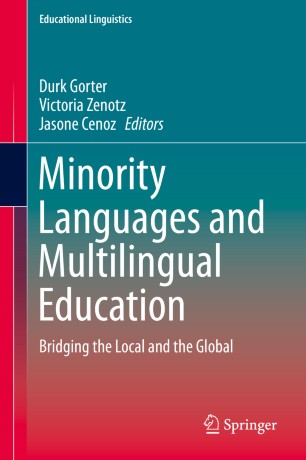 Bridging the Local and the Global

This book presents research on the situation minority language schoolchildren face when they need to learn languages of international communication, in particular English. The book takes minority languages as a starting point and it bridges local and global perspectives in the analysis of multilingual education contexts. It examines the interaction of minority languages and cultures, majority languages and lingua franca-s in a variety of settings across different regions and countries on all continents. Even though all chapters in this book involve minority languages, the issues discussed are relevant to any context in which more than language is used in education.

The book reveals challenges and opportunities of multilingual education by discussing issues such as Northern and Southern concepts, language education policies, language diversity, interethnic understanding, multimodal language practices, power, conflict, identity and prestige, among many others.

“This is the volume that finally accounts for multilingual education from a truly multilingual perspective by involving proposals and research from a variety of multilingual speech communities in the world. The (linguistically) rich Ethiopia and Mexico can teach the poor Europe and other Northern countries about multilingual education. CLIL promoters may learn from Finnish Sámi and Canadian Innu and Mi’gmaq indigenous communities as well as from Basque results. Speakers and teachers of minority and international languages will certainly be glad to hear the news. There is no need for a monolingual bias or tunnel vision in acquiring English in non-English speaking communities. This volume includes new challenging pedagogical perspectives while pointing to interesting conclusions for worldwide educational authorities”. Maria Pilar Safont Jordà, Universitat Jaume I, Castelló, Spain