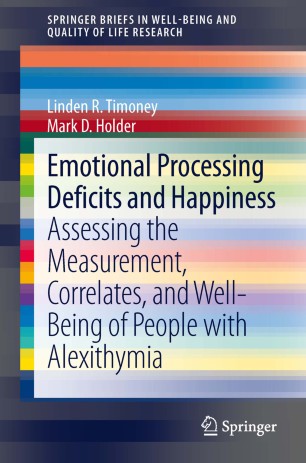 Assessing the Measurement, Correlates, and Well-Being of People with Alexithymia

This briefs reviews the literature on alexithymia with a particular focus on the relation between positive well-being and alexithymia. It starts by exploring the definition, history and etiology of the construct. The briefs then discusses the importance of research and presents new research which sheds light on why alexithymia is characterized by poor well-being. The research strongly suggests that people who score high in alexithymia are low in aspects of positive well-being such as happiness, life satisfaction, and positive affect, and high in aspects of negative well-being, such as depression and negative affect.  Next, the book examines the correlates of alexithymia and the latter’s relation with personality and subjective well-being. Although there has been an increased interest in human flourishing, and even though research in positive psychology has included personality, there has been little application of positive psychology to people with deficits in emotional processing including people with alexithymia. This briefs fills that gap.