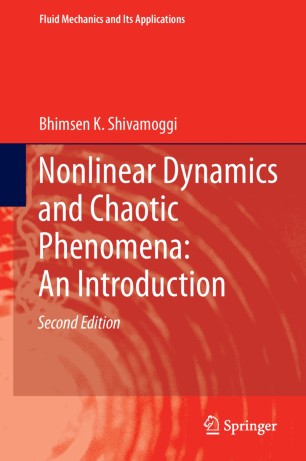 Part of the Fluid Mechanics and Its Applications book series (FMIA, volume 103)

This book starts with a discussion of nonlinear ordinary differential equations, bifurcation theory and Hamiltonian dynamics. It then embarks on a systematic discussion of the traditional topics of modern nonlinear dynamics  -- integrable systems, Poincaré maps, chaos, fractals and strange attractors. The Baker’s transformation, the logistic map and Lorenz system are discussed in detail in view of their central place in the subject. There is a detailed discussion of solitons centered around the Korteweg-deVries equation in view of its central place in integrable systems. Then, there is a discussion of the Painlevé property of nonlinear differential equations which seems to provide a test of integrability. Finally, there is a detailed discussion of the application of fractals and multi-fractals to fully-developed turbulence -- a problem whose understanding has been considerably enriched by the application of the concepts and methods of modern nonlinear dynamics. On the application side, there is a special emphasis on some aspects of fluid dynamics and plasma physics reflecting the author’s involvement in these areas of physics. A few exercises have been provided that range from simple applications to occasional considerable extension of the theory. This book has grown out of the author’s lecture notes for an interdisciplinary graduate-level course on nonlinear dynamics. The basic concepts, language and results of nonlinear dynamical systems are described in a clear and coherent way. In order to allow for an interdisciplinary readership, an informal style has been adopted and the mathematical formalism has been kept to a minimum.

This book is addressed to first-year graduate students in applied mathematics, physics, and engineering, and is useful also to any theoretically inclined researcher in the physical sciences and engineering.

This second edition constitutes an extensive rewrite of the text involving refinement and enhancement of the clarity and precision, updating and amplification of several sections, addition of new material like theory of nonlinear differential equations, solitons, Lagrangian chaos in fluids, and critical phenomena perspectives on the fluid turbulence problem and many new exercises.