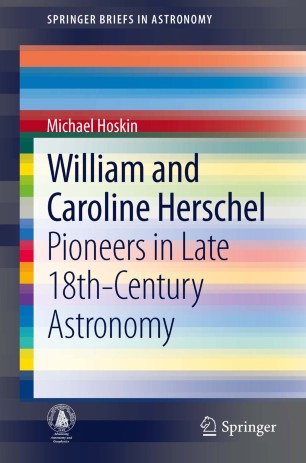 This beautifully structured book presents the essentials of William and Caroline Herschel’s pioneering achievements in late 18th-century astronomy. Michael Hoskin shows that William Herschel was the first observational cosmologist and one of the first observers to attack the sidereal universe beyond the solar system:

While it is well-known that Herschel was a revolutionary in telescope design who constructed the world’s largest telescopes, Hoskin also gives the full picture of the man as an entrepreneur who built and traded some 400 telescopes.

Hoskin also pays close attention to the role of William's sister Caroline Herschel, who is usually portrayed as a “helpmate” to her brother. But in fact she became a significant astronomer in her own right.

This book also offers a wealth of information of the wider Herschel family. It is enriched by a complete set of portraits of William and Caroline Herschel with an extensive set of images of their residences and closes with a charming appendix on how visitors to the Herschels recorded their encounters.

William and Caroline Herschel – Pioneers in Late 18th-Century Astronomy will appeal to amateur astronomers and all those interested in popular astronomy. This book will rapidly establish itself as the primary introductory work for students, astronomers, and scholars working on the history of natural science in the late 18th century.