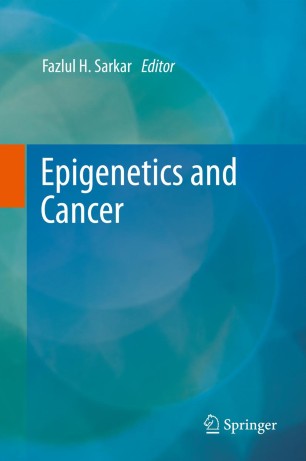 Overall, this book illustrates the complexities of the regulation and deregulation of genes mediated through epigenetics in the development and progression of human malignancies. All the articles have been carefully chosen to represent several cancer systems with state of our knowledge on the role of epigenetic deregulation of microRNAs (miRNAs) and their target mRNAs along with epigenetic deregulation of mRNAs. This book also illustrates the role of several dietary agents, collectively called nutraceuticals or natural agents in modulating the epigenetic reprogramming of miRNAs and mRNAs for the prevention and/or treatment of human malignancies. It is well known that genetic aberrations, especially inherited through parents (somatic genetic alterations) contribute to the development of less than 10% of all cancer yet epigenetic alterations in genes especially through selective methylation and acetylation appears to be responsible for the development and progression of the vast majority of all cancers. Therefore, understanding the role of epigenetics in the regulation of genes especially through deregulated expression of miRNAs as presented in this book will allow scientists to devise targeted therapeutic strategies for re-expression of the lost genes or down-regulate the genes that are over-expressed in order to eradicate cancer. It is hoped that targeting epigenetics will not only target cancer cells but it will also target the tumor microenvironment (more like the entire tumor environment such as the entire host) for achieving better treatment outcomes for patients diagnosed with cancer which will lead to achieve the long-term objective for complete eradication of cancer. This book contains fifteen chapters which begins with the concept of systems and network biology for investigating the epigenetics of cancer followed by a series of articles on the role of miRNAs and their target genes in the biology of pancreatic cancer and other cancers such as breast, kidney, prostate and and colon. Since it is becoming increasingly clear that cancer stem cells (CSCs) are important in the development and progression of cancer, and CSCs are important in therapeutic resistance, treatment failure and tumor recurrence, thus the importance of CSCs and epigenetics has been highlighted by a very timely article on epigenetic variations of stem cell markers in cancer including miRNAs. Moreover, just targeting heterogeneous cancer cell populations may not be optimal to eradicate tumors and for which one must take a holistic approach for developing drugs that could also target the tumor microenvironment and tumor dormancy that are regulated through epigenetics. Keeping abreast with this thought process the concluding chapter provides a concept towards curative cancer therapy with maspin, which could be a unique window of opportunity to target tumor dormancy. Therefore, it suggest that targeting the tumor dormancy and the tumor microenvironment using novel therapeutics specifically by targeting epigenetics would become the future of medicine.