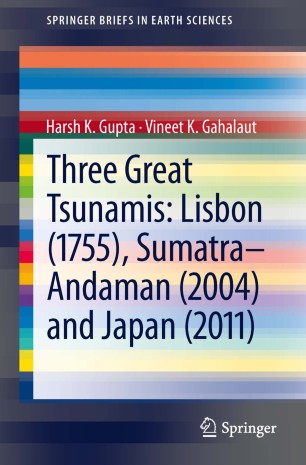 Tsunamis are primarily caused by earthquakes. Under favourable geological conditions, when a large earthquake occurs below the sea bed and the resultant rupture causes a vertical displacement of the ocean bed, the entire column of water above it is displaced, causing a tsunami. In the ocean, tsunamis do not reach great heights but can travel at velocities of up to 1000 km/hour. As a tsunami reaches shallow sea depths, there is a decrease in its velocity and an increase in its height. Tsunamis are known to have reached heights of several tens of meters and inundate several kilometres inland from the shore. Tsunamis can also be caused by displacement of substantial amounts of water by landslides, volcanic eruptions, glacier calving and rarely by meteorite impacts and nuclear tests in the ocean.
In this SpringerBrief, the causes of tsunamis, their intensity and magnitude scales, global distribution and a list of major tsunamis are provided. The three great tsunamis of 1755, 2004 and 2011are presented in detail. The 1755 tsunami caused by the Lisbon earthquake, now estimated to range from Mw 8.5 to 9.0, was the most damaging tsunami ever in the Atlantic ocean. It claimed an estimated 100,000 human lives and caused wide-spread damage. The 2004 Sumatra Andaman Mw 9.1 earthquake and the resultant tsunami were the deadliest ever to hit the globe, claiming over 230,000 human lives and causing wide-spread financial losses in several south and south-east Asian countries. The 2011 Mw 9.0 Tohoku-Oki earthquake and the resultant tsunami were a surprise to the seismologists in Japan and around the globe. The height of the tsunami far exceeded the estimated heights. It claimed about 20,000 human lives. The tsunami also caused nuclear accidents. This earthquake has given rise to a global debate on how to estimate the maximum size of an earthquake in a given region and the safety of nuclear power plants in coastal regions. This Brief also includes a description of key components of tsunami warning centres, progress in deploying tsunami watch and warning facilities globally, tsunami advisories and their communication, and the way forward.