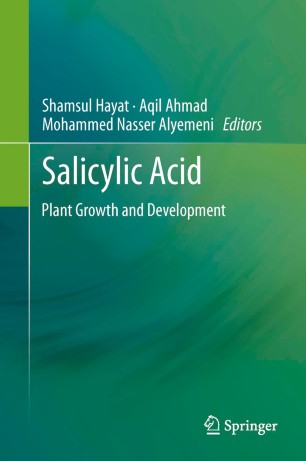 Phytohormones are known to  direct plant growth, in a coordinated fashion in association with the metabolism that supplies energy and the building blocks to generate the form that is recognized as a plant. Out of the chemicals recognized as hormones, attention has largely been focused on Auxins, Gibberellins, Cytokinins, Abscisic acid, Ethylene and more recently to Brassinosteroids. However, this book provides the recent information about a natural chemical, Salicylic Acid, that could be raised to the status as assigned to the above phytohormones because it has significant regulatory impact on important aspects of the plant life.  Salicylic acid (SA) was first discovered as a major component in the bark extracts from Salix (willow) which was used as an anti-inflammatory drug. However, SA is ubiquitous in plants, generating a significant impact on plant growth and development, photosynthesis, transpiration, ion uptake and their transport. Moreover, SA also induces specific changes in leaf anatomy and chloroplast structure. SA is recognized as an endogenous signal, mediating in plant defence, against pathogens.  In this book a total of 16 chapters have been included which provide a recent update on salicylic acid. This book is not an encyclopedia of reviews but includes a selected collection of newly written, integrated, illustrated reviews describing our knowledge on salicylic acid. The aim of this book is to tell about the salicylic acid involvement in plants, by the present time. The various chapters incorporate both theoretical and practical aspects which may serve as a baseline information for future research through which significant developments are possible. We are of the opinion that this book will be of immense importance to all those who have even the least interest in biological and agricultural sciences.