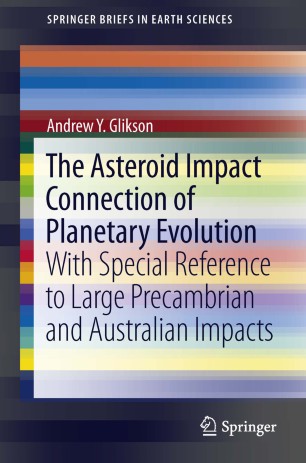 With Special Reference to Large Precambrian and Australian impacts

When in 1981 Louis and Walter Alvarez, the father and son team, unearthed a tell-tale Iridium-rich sedimentary horizon at the 65 million years-old Cretaceous-Tertiary boundary at Gubbio, Italy, their find heralded a paradigm shift in the study of terrestrial evolution.  Since the 1980s the discovery and study of asteroid impact ejecta in the oldest well-preserved terrains of Western Australia and South Africa, by Don Lowe, Gary Byerly, Bruce Simonson, the author and others, and the documentation of new exposed and buried impact structures in several continents, led to a resurgence of the idea of the catastrophism theory of Cuvier, earlier largely supplanted by the uniformitarian theory of Hutton and Lyell. Several mass extinction of species events are known to have occurred in temporal proximity to large asteroid impacts, global volcanic eruptions and continental splitting. Likely links are observed between asteroid clusters and at 580 Ma, end-Devonian, end-Triassic and end-Jurassic extinctions. New discoveries of ~3.5 Ga-old impact fallout units in South Africa have led Lowe and Byerly to propose a protracted continuation of the Late Heavy Bombardment (~3.95-3.85 Ga) in the Earth-Moon system. Given the difficulty in identifying asteroid impact ejecta units and buried impact structures, it is likely new discoveries of impact signatures are in store, which would further profoundly alter models of terrestrial evolution.