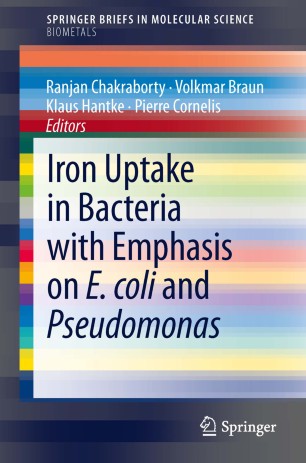 Iron Uptake in Bacteria with Emphasis on E. coli and Pseudomonas

Iron is essential for the growth of most bacteria because it serves as a cofactor for vital enzymes and for the components of the electron transport chain. Moreover, Iron plays an important role in bacterial pathogenicity; in fact, the iron transport systems in bacteria works as target for designing novel antibiotics. Because iron is not soluble under aerobic conditions, bacteria have had to find ways to overcome iron deficiency. One of them is producing an iron-chelating small organic molecule called siderophore. Indeed, most bacteria and fungi produce structurally and chemically diverse siderophores which are transported back to the cytoplasm using complex energy dependent transport systems. Escherichia coli and Pseudomonas were the first ones to be tested; however, nowadays iron transport systems have been investigated in many other bacteria.

This book is aimed at researchers in the fields of iron metabolism in multiple organisms, and to those who are interested in studying iron transport systems of bacteria. It appeals also to scientists researching structure and function relationship of proteins.