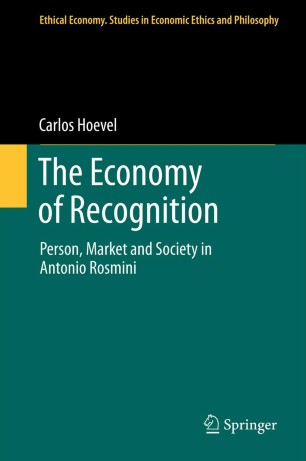 The Economy of Recognition

Introducing an alternative philosophical foundation to the study of economics, this book explains and adopts the perspective of the Italian philosopher Antonio Rosmini (1797-1855), whose interpretation of economic action was fundamentally at odds with the prevailing and all-conquering utilitarianism of modernity. Rosmini, one of the most important Italian and Catholic philosophers of the modern age, eschewed the traditional concepts of subjectivism and individualism at the core of the utilitarian thesis, prefiguring today’s critique of ‘autistic economics’ with his assertion that micro-economic formulae consecrating the ‘maximization of utility’ derive not from scientific principles or even hypotheses, but from uncritically adopted philosophical ideas. It was an assault on the determinism he perceived as the fatal flaw in accepted economic theory.   Rosmini’s notion of human and economic action, based on human beings’ ‘personal’ capacities for objective knowledge, truth recognition, moral goodness and happiness, deeply transform the meaning of central economic activities such as labour, wealth creation and consumption, and become crucial factors in any analysis of the operation of the economy. After introducing the fundamentals of Rosmini’s thought, the author details the theoretical and institutional features of utilitarian economics, tracing their influence on social norms. He juxtaposes these with Rosmini’s alternative philosophy which places the concept of social justice at its heart, and which attempts to establish a framework for relations between the public and private realms. The contemporary case is then made for adopting Rosmini’s principles, thus changing an economic paradigm widely held to be unassailable. The fruit of unprecedented and systematic research on Rosmini’s economic ideas, this volume offers a detailed conceptual framework to guide alternative approaches to conventional neoclassical economics.​