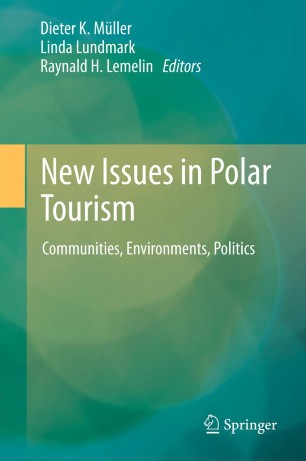 New Issues in Polar Tourism traces and analyzes a decade of growing interest in the polar regions, and the consequent challenges and opportunities of increasing tourist traffic in formerly remote and seldom-visited places. The book arises from the recently-formed International Polar Tourism Research Network (IPTRN), and documents the outcomes of its 2010 conference, held at Sweden’s Abisko Scientific Research Station.

Opening with a review of the early history of polar tourism, the book discusses reasons for the rise in traffic to more than 12 million visitors to the Arctic (2006) and some 40,000 to the Antarctic (2009-10). These causes include “last chance” tourism inspired by increased media coverage of climate change, easier access to remote areas due to the shortening ice-season and the pursuit of tourism by destination areas seeking economic and employment opportunities.

In subsequent chapters, the editors and contributors introduce environmental politics and impacts, and draw attention to physical impacts of tourism, to conceptual ideas of polar wilderness and to practical political action. The third section of the book addresses communities and tourism in polar areas, discussing how businesses operate in polar environment with respect to climate change and how the tourism industry can both advance and threaten efforts to sustain delicate environments and communities.

Coverage includes case studies examining indigenous peoples and tourism, a chapter speculating on the nature of winter tourism in n Sweden in the year 2040 and a concluding chapter which draws together the findings of the book.