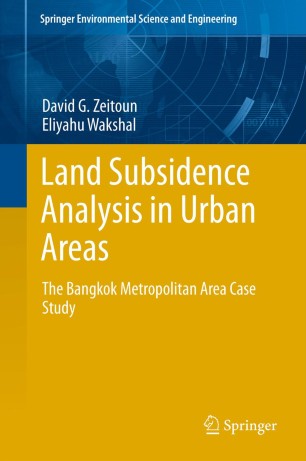 Cities built on unconsolidated sediments consisting of clays, silt, peat, and sand, are particularly susceptible to subsidence.  Such regions are common in delta areas, where rivers empty into the oceans, along flood plains adjacent to rivers, and in coastal marsh lands.  Building cities in such areas aggravates the problem for several reasons:

2.  Often the regions have to be drained in order to be occupied.  This results in lowering of the water table and leads to hydro-compaction.

3. Often the groundwater is used as a source of water for both human consumption and industrial use.

4. Levees and dams are often built to prevent or control flooding.

Earth fissures caused by ground failure in areas of uneven or differential compaction have damaged buildings, roads and highways, railroads, flood-control structures and sewer lines. As emphasized by Barends , "in order to develop a legal framework to claims and litigation, it is essential that direct and indirect causes of land subsidence effects can be quantified with sufficient accuracy from a technical and scientific point of view."

Most existing methods and software applications treat the subsidence problem by analyzing one of the causes.  This is due to the fact that the causes appear at different spatial scales. For example, over-pumping creates large scale subsidence, while building loading creates local subsidence/consolidation only.

Then, maximum permissible land subsidence (or consolidation) is a constraint in different management problems such as: groundwater management, planning of town and/or laws on building construction. It is, therefore, necessary to quantify the contribution of each cause to soil subsidence of the ground surface in cities urban area.

In this text book, we present an engineering approach based on the Biot system of equations to predict the soil settlement due to subsidence, resulting from different causes. Also we present a case study of The Bangkok Metropolitan Area (BMA).