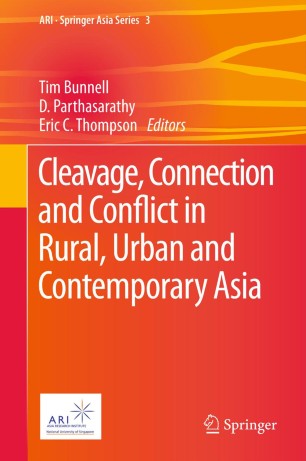 Cleavage, Connection and Conflict in Rural, Urban and Contemporary Asia

Asia, the location of the world’s fastest-growing economies, is also home to some of the fastest rates of urbanization humanity has ever seen, a process whose speed renders long-term outcomes highly unpredictable. This volume contrasts with much published work on the rural/urban divide, which has tended to focus on single case studies. It provides empirical perspectives from four Asian countries: India, Indonesia, Malaysia, and Thailand, and includes a wealth of insights that both critique and expand popular notions of the rural-urban divide. The volume is relevant not just to Asian contexts but to social scientific research on population dynamics more generally.

Rather than deploying a single study to chart national trends, three chapters on each country make possible much more complex perspectives. As a result, this volume does more than extend our understanding of the interplay between cities and hinterlands within Asia. It enhances our notions of rural/urban cleavages, connections and conflicts more generally, with data and analysis ready for application to other contexts. Of interest to diverse scholars across the social sciences and Asian studies, this work includes accounts ranging from rural youth real estate entrepreneurs in Hyderabad, India, to social development in Aceh province in Indonesia, devastated by the 2004 tsunami, to the relationship between urban space and commonly held notions of the supernatural in Thailand’s northern city of Chiang Mai.