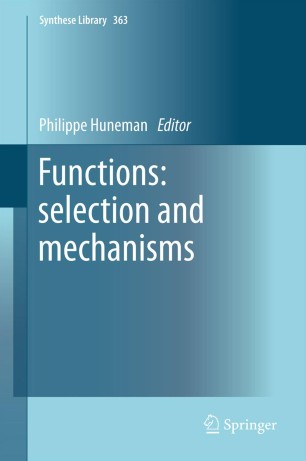 This  volume handles in various perspectives the concept of function and the nature of functional explanations, topics much discussed since two major and conflicting accounts have been raised by Larry Wright and Robert Cummins’s papers in the 1970s. Here, both Wright’s ‘etiological theory of functions’ and Cummins’s ‘systemic’ conception of functions are refined and elaborated in the light of current scientific practice, with papers showing how the ‘etiological’ theory faces several objections and may in reply be revisited, while its counterpart became ever more sophisticated, as researchers discovered fresh applications for it.

Relying on a firm knowledge of the original positions and debates, this volume presents cutting-edge research evincing the complexities that today pertain in function theory in various sciences. Alongside original papers from authors central to the controversy, work by emerging researchers taking novel perspectives will add to the potential avenues to be followed in the future. Not only does the book adopt no a priori assumptions about the scope of functional explanations, it also incorporates material from several very different scientific domains, e.g. neurosciences, ecology, or technology.

In general, functions are implemented in mechanisms; and functional explanations in biology have often an essential relation with natural selection. These two basic claims set the stage for this book’s coverage of investigations concerning both ‘functional’ explanations, and the ‘metaphysics’ of functions. It casts new light on these claims, by testing them through their confrontation with scientific developments in biology, psychology, and recent developments concerning the metaphysics of realization. Rather than debating a single theory of functions, this book presents the richness of philosophical issues raised by functional discourse throughout the various sciences.​