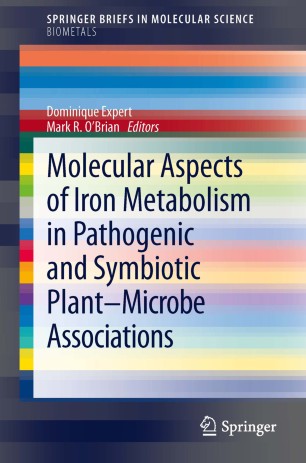 Iron plays a key role in biology as essential cofactor of numerous proteins. However, since it is only slightly soluble its bioavailability can be readily compromised under aerobic conditions. Moreover, due to its ability to catalyze the generation of free radicals, iron can also be toxic. Thus, it doesn’t surprise that living organisms have developed sophisticated means for acquiring iron whilst tightly controlling the intracellular concentrations of this metal in response to environmental conditions. Also, the critical role of iron has long been acknowledged in host vertebrate-parasite relationships where both partners compete for the acquisition of this essential element and activate complex signaling cascades to control their iron homeostasis during infection.

Following the great interest that the mechanisms regulating the acquisition of iron and the control of iron homeostasis have generated among researchers studying plant-pathogen and legume-rhizobia interactions, this book offers a comprehensive analysis of irons’ various roles in the plant-microbial associations. The introductory chapter stresses the essentiality of iron in biological systems. The second chapter surveys the abundance of information on iron’s pivotal role in microbial plant pathogenesis and defence. Finally, the third chapter reviews the advances in our understanding of iron metabolism in the rhizobia, soil bacteria able to establish a symbiotic association with legumes and carry out nitrogen fixation.

Molecular Aspects of Iron Metabolism in Pathogenic and Symbiotic Plant-Microbe Associations is a valuable resource to microbiologists, pathologists and scientists interested in iron uptake and metabolism in microbial pathogenesis, rhizobia legume associations, and plant physiology and immunity.