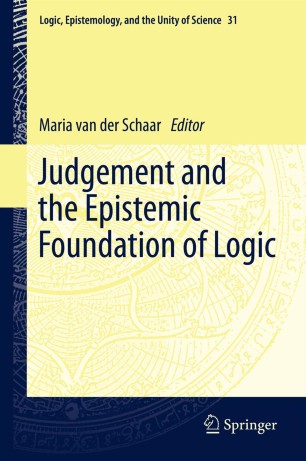 Judgement and the Epistemic Foundation of Logic

Part of the Logic, Epistemology, and the Unity of Science book series (LEUS, volume 31)

This compelling reevaluation of the relationship between logic and knowledge affirms the key role that the notion of judgement must play in such a review. The commentary repatriates the concept of judgement in the discussion, banished in recent times by the logical positivism of Wittgenstein, Hilbert and Schlick, and the Platonism of Bolzano. The volume commences with the insights of Swedish philosopher Per Martin-Löf, the father of constructive type theory, for whom logic is a demonstrative science in which judgement is a settled feature of the landscape. His paper opens the first of four sections that examine, in turn, historical philosophical assessments of judgement and reason; their place in early modern philosophy; the notion of judgement and logical theory in Wolff, Kant and Neo-Kantians like Windelband; their development in the Husserlian phenomenological paradigm; and the work of Bolzano, Russell and Frege. The papers, whose authors include Per Martin-Löf, Göran Sundholm, Michael Della Rocca and Robin Rollinger, represent a finely judged editorial selection highlighting work on philosophers exercised by the question of whether or not an epistemic notion of judgement has a role to play in logic. The volume will be of profound interest to students and academicians for its application of historical developments in philosophy to the solution of vexatious contemporary issues in the foundation of logic. ​