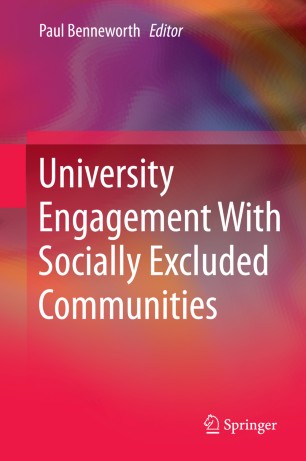 This volume provides insightful analysis of the way higher education engages with socially excluded communities. Leading researchers and commentators examine the validity of the claim that universities can be active facilitators of social mobility, opening access to the knowledge economy for formerly excluded groups. The authors assess the extent to which the ‘Academy’ can deliver on its promise to build bridges with communities whose young people often assume that higher education lies beyond their ambitions. The chapters map the core dynamics of the relationship between higher education and communities which have bucked the more general trend of rapidly rising student numbers. Contributors also take the opportunity to reflect on the potential impact of these dynamics on the evolution of the university’s role as a social institution. The volume was inspired by a symposium attended by a wide spectrum of participants, including government, senior university managers, academic researchers and community groups based in areas suffering from social exclusion. It makes a substantive contribution to an under-researched field, with authors seeking to both shape solutions as well as better diagnose the problem. Some chapters include valuable contextual analysis, using empirical data from North America, Europe and Australia to add substance to the debates on policy and theory. The volume seeks to offer a defining intellectual statement on the interaction between the concept of a ‘university’ and those communities historically missing from higher education participation, the volume deepens our understanding of what might characterise an ‘engaged’ university and strengthens the theoretical foundations of the topic.