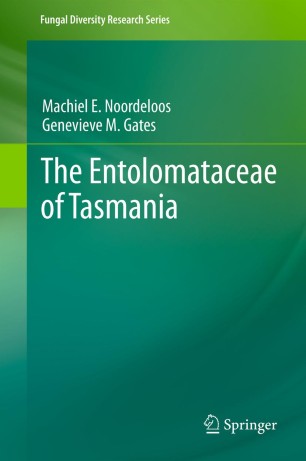 This book is the result of 14 years of collecting Entolomataceae in the native forests of Tasmania, Australia. Although initially involving only the Tasmanian residents Genevieve Gates and David Ratkowsky, who made twice- or thrice-weekly forays into the forests throughout the year, the project was subsequently joined by agaric specialist Machiel Noordeloos from the Netherlands, and by fungi photographer Michael Pilkington from the United Kingdom.

The international character of the project is further evidenced by the earlier contributions of American mycologist Tim Baroni to the Tasmanian Rhodocybe species which form the basis of the chapter on the now-expanded concept of Clitopilus, and a visit of several months in 2010 by Brazilian Ph.D. candidate Fernanda Karstedt, who tested the keys to the Entoloma species. Consequently, several thousand well-annotated collections were found during this inventory and form the basis of this monographic treatment of the Entoloma and Clitopilus of Tasmania.

The resulting 90 Entoloma species and 10 Clitopilus species are well documented with standardized descriptions, line drawings of fruit bodies and diagnostic microscopic characters, and, when available, with colour photographs. Thanks to the intensive search, it was possible to illustrate most species in colour. Dichotomous keys facilitate identification of the species. The species concept used is morphologically based; in several cases, however, identification to species level is supported by molecular data.