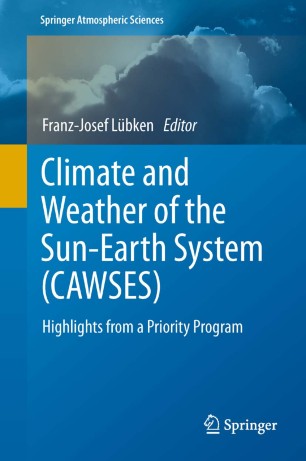 Climate and Weather of the Sun-Earth System (CAWSES)

Highlights from a Priority Program

CAWSES (Climate and Weather of the Sun-Earth System) is the most important scientific program of SCOSTEP (Scientific Committee on Solar-Terrestrial Physics). CAWSES has triggered a scientific priority program within the German Research Foundation for a period of 6 years. Approximately 30 scientific institutes and 120 scientists were involved in Germany with strong links to international partners. The priority program focuses on solar influence on climate, atmospheric coupling processes, and space climatology.

This book summarizes the most important results from this program covering some important research topics from the Sun to climate. Solar related processes are studied including the evolution of solar radiation with relevance to climate. Results regarding the influence of the Sun on the terrestrial atmosphere from the troposphere to the thermosphere are presented including stratospheric ozone, mesospheric ice clouds, geomagnetic effects, and their relevance to climate. Several chapters highlight the importance of coupling mechanisms within the atmosphere, covering transport mechanisms of photochemically active species, dynamical processes such as gravity waves, tides, and planetary waves, and feedback mechanisms between the thermal and dynamical structure of the atmosphere. Special attention is paid to climate signals in the middle and upper atmosphere and their significance relative to natural variability.

Audience: This book will be of interest to scientists and researchers in atmospheric physics/chemistry and in climate.