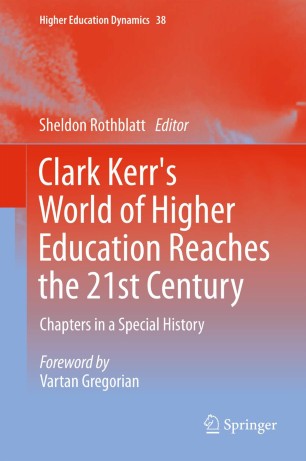 Chapters in a Special History

This volume consists of original essays by academic leaders and scholars connected to Clark Kerr’s life and work. He was arguably America’s most significant higher education thinker and public policy analyst in the last 50 years of the 20th century and renowned globally. However, little thoughtful attention has been devoted to assessing the whole of his work. Some commentators misunderstand the man as well as his ideas. The California Master Plan for Higher Education of 1960 was one of his famous undertakings, as was his part in shaping the multi-campus University of California towards global eminence.  He coined the word “multiversity” to describe what he called the “uses” of the university, but began to think it had become much too “multi”. Some of his most important work was as director of the Carnegie Commission on Higher Education and the Carnegie Council on Policy Studies in Higher Education, which laid the foundation for sophisticated policy-making. The contributors honor the achievements of a remarkable man and provide portraits of him, but of equal importance are their critical discussions of the sources of his thinking, his attempts to balance access and merit in mass higher education circumstances, the policy issues that he confronted and the success of their resolution. For many of the contributors, Kerr’s work is the starting point for understanding policy issues in varying regional and national contexts. Often thought to be a social scientist eager to keep abreast of trends, Kerr was actually au fond a moralist and surprisingly old-fashioned in his personal values.