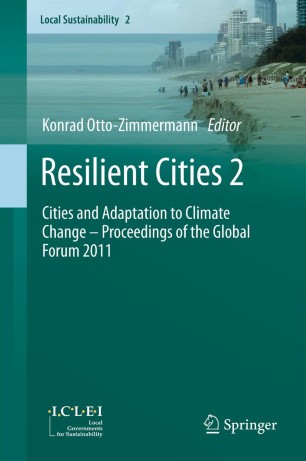 Despite the cynicism of skeptics, climate change really is happening, and its effects will be most pronounced in cities. Many are vulnerable to small rises in sea level, while urbanisation is adding demographically derived stresses to already-pressurised urban ecosystem services. The combination of these factors suggests that efforts to respond to the negative impacts of climate change will have to be made at the local level, even as we collectively continue the important work of shaping and implementing adaptation and mitigation actions. In examining the most likely consequences of this ‘double whammy’ of environmental and population impacts on urban areas, this book makes clear the need to incorporate climate change concerns into the mainstream of local planning, governance and policy making practices. By offering the conceptual framework for adaptation and implementation within cities, along with more practical adaptation measures, the authors demonstrate the key role cities must play in the fight against climate change. With urban communities as various as Copenhagen, Mexico City and Ho Chi Minh City already enacting policy proposals such as ‘climate-proofing’ their infrastructure, there is much that other cities can learn from those in the vanguard.

Assembling papers originally presented at the Resilient Cities 2011 Congress in Bonn, Germany (June 2011), the second global forum on cities and adaptation to climate change, this volume is the second in a series resulting from this annual event. These cutting-edge papers represent the latest research on the topic and reflect the intensification of the debate on the meaning of and interaction between climate adaptation, risk reduction and broader resilience.