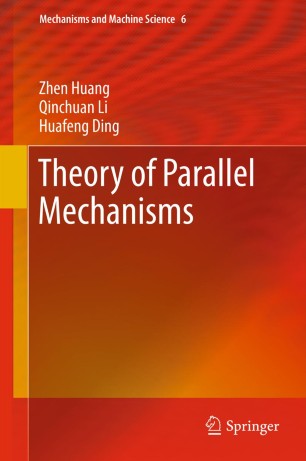 In mechanism analysis, a mobility methodology is first systematically presented. This methodology, based on the author's screw theory, proposed in 1997, of which the generality and validity was only proved recently,  is a very complex issue, researched by various scientists over the last 150 years. The principle of kinematic influence coefficient and its latest developments are described. This principle is suitable for kinematic analysis of various 6-DOF and lower-mobility parallel manipulators. The singularities are classified by a new point of view, and progress in position-singularity and orientation-singularity is stated. In addition, the concept of over-determinate input is proposed and a new method of force analysis based on screw theory is presented.

In mechanism synthesis, the synthesis for spatial parallel mechanisms is discussed, and the synthesis method of difficult 4-DOF and 5-DOF symmetric mechanisms, which was first put forward by the author in 2002, is introduced in detail. Besides, the three-order screw system and its space distribution of the kinematic screws for infinite possible motions of lower mobility mechanisms are both analyzed.