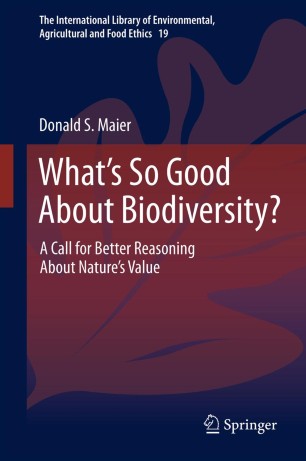 What’s So Good About Biodiversity?

A Call for Better Reasoning About Nature’s Value

Part of the The International Library of Environmental, Agricultural and Food Ethics book series (LEAF, volume 19)

This book is unique in its treatment of biodiversity, which has come to be an emblem of what is worthy of protection and fostering in the natural world.  It undertakes a comprehensive, detailed, and careful philosophical analysis of the many reasons that scientists, economists, philosophers, and others offer for why biodiversity is supposed to be such a central good of nature.  Its conclusion is both surprising and disturbing:  No reason for biodiversity's good can be found that is not ill-conceived, logically indefensible, internally contradictory, or self-undermining.

The profound failure to find the good of nature in its biodiversity is a springboard for rethinking what, exactly, makes the natural world so uniquely and robustly valuable.  This leads to a novel suggestion – that nature's value might be located in a particular human-nature relationship, which anchors the appropriate fit of people in the world at large.  Understanding nature's value in this way has far-reaching consequences, which call into question common orthodoxies of conservation, restoration, and environmentalism generally.

"In 1985, Michael Soulé, considered by many to be the father of the academic discipline of conservation biology, laid out his four normative postulates for the field: diversity of organisms is good, ecological complexity is good, evolution is good, and biotic diversity has intrinsic value.  In this book, Don Maier provides an essential, lucid, and critical evaluation of these claims.  It is a must read for all who seek to conserve the diversity of life."

"It’s widely claimed that biodiversity is valuable.  But to date, there has been little systematic, critical scrutiny of this claim.  Don Maier’s “What’s so good about biodiversity?” boldly undertakes this task. After carefully examining a variety of arguments for the value of biodiversity, and expressing serious doubts about where the valuation of biodiversity leads, Maier concludes that “Biodiversity is the wrong hook on which to hang the value of nature”.  Not content with a purely negative project, Maier then proposes his own, thought-provoking account of natural value.  Maier’s book will stimulate readers to scrutinize and reassess their own beliefs about value in nature.  His book will make a significant contribution to environmental ethics, and to broader debates about the ultimate goals of environmental conservation."