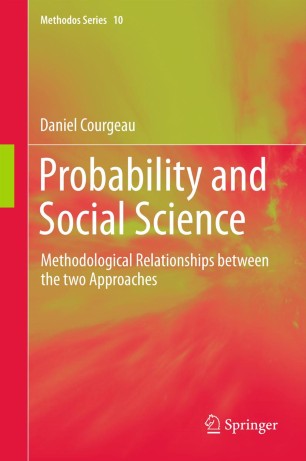 Methodological Relationships between the two Approaches

This work examines in depth the methodological relationships that probability and statistics have maintained with the social sciences from their emergence. It covers both the history of thought and current methods.

First it examines in detail the history of the different paradigms and axioms for probability, from their emergence in the seventeenth century up to the most recent developments of the three major concepts: objective, subjective and logicist probability. It shows the statistical inference they permit, different applications to social sciences and the main problems they encounter.

On the other side, from social sciences—particularly population sciences—to probability, it shows the different uses they made of probabilistic concepts during their history, from the seventeenth century, according to their paradigms: cross-sectional, longitudinal, hierarchical, contextual and multilevel approaches. While the ties may have seemed loose at times, they have more often been very close: some advances in probability were driven by the search for answers to questions raised by the social sciences; conversely, the latter have made progress thanks to advances in probability.

This dual approach sheds new light on the historical development of the social sciences and probability, and on the enduring relevance of their links. It permits also to solve a number of methodological problems encountered all along their history.