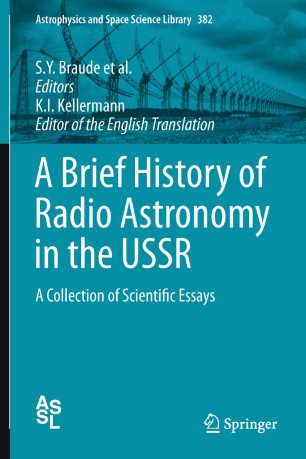 A Brief History of Radio Astronomy in the USSR

A Collection of Scientific Essays

This translation from Russian makes the history of radio astronomy in the USSR available in the English language for the first time. The book includes descriptions of the antennas and instrumentation used in the USSR, the astronomical discoveries, as well as interesting personal backgrounds of many of the early key players in Soviet radio astronomy. A Brief History of Radio Astronomy in the USSR is a collection of memoirs recounting an interesting but largely still dark era of Soviet astronomy. The arrangement of the essays is determined primarily by the time when radio astronomy studies began at the institutions involved. These include the Lebedev Physical Institute (FIAN), Gorkii State University and the affiliated Physical-Technical Institute (GIFTI), Moscow State University Sternberg Astronomical institute (GAISH) and Space Research Institute (IKI), the Department of Radio Astronomy of the Main Astronomical Observatory in Pulkovo (GAO), Special Astrophysical Observatory (SAO), Byurakan Astrophysical Observatory (BAO), Crimean Astrophysical Observatory, Academy of Sciences of the Ukrainian (SSR), Institute of Radio Physics and Electronics of the USSR Academy of Sciences (IRE), Institute of Terrestrial Magnetism, the Ionosphere and Radio-Wave Propagation Institute (IZMIRAN), Siberian Institute of Terrestrial Magnetism, the Ionosphere and Radio-Wave Propagation (SibIZMIRAN), the Radio Astrophysical Observatory of the Latvian Academy of Sciences and Leningrad State University.

A Brief History of Radio Astronomy in the USSR is a fascinating source of information on a past era of scientific culture and fields of research including the Soviet SETI activities. Anyone interested in the recent history of science will enjoy reading this volume.