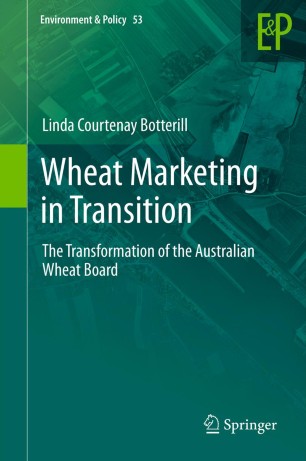 The Transformation of the Australian Wheat Board

This detailed account tells the background story of a privatised monopoly whose sharp practices embroiled a national government in scandal and shocked a nation that prides itself on the strength of its institutions. AWB Limited, the former Australian Wheat Board that in the 1990s was sold into the private sector, paid more than $US200m in kickbacks to the pariah regime of Saddam Hussein in Iraq, exploiting the provisions of the United Nations’ Oil for Food program by inflating the price of the wheat it sent there to disguise the pay-offs that secured the contracts. The ensuing uproar threatened the careers of key cabinet ministers in the Howard government and contributed to the rise and subsequent election victory of the Australian Labor Party’s Kevin Rudd.

There is no doubting wheat’s centrality as a commodity. Of all the basic foodstuffs, this versatile grain is a vital cog in the international trading mechanism, arousing passion and ambition in equal measure. The 60-year history of the Australian Wheat Board and its subsequent privatised incarnation is a fascinating—and much misunderstood—story that involves decision-makers at the highest level and commercial interests at their most competitive and rapacious. The board held a monopoly on Australian wheat exports for decades, seamlessly shifting into the private sector in 1995. Motivated by the misunderstandings surrounding this privatisation and the revelations that followed it in the mid-2000s, this volume sets the record straight with a comprehensive analysis of the genesis and development of an institution with its origins in mutuality that foundered in the perilous waters of cut-throat international trade. The author’s role as a strategic advisor in the privatisation ensures a uniquely informed perspective on a story that provides an object lesson in institutional management to governments around the world.