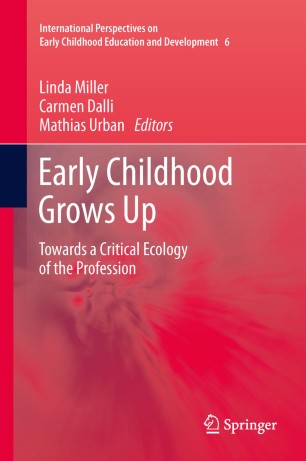 Towards a Critical Ecology of the Profession

Once the Cinderella of the education system, early years education has evolved into a much more substantially funded sector in which increasing demands are placed on staff at the same time as opportunities for their higher-level training and education have expanded. This book reflects the fact that these changes have fostered a good deal of debate about early years education and its practitioners, who have to explore fundamental questions such as whether or not their field of work is a profession at all. Two key arguments are presented. The first is that early years education has matured to the point that pedagogical and regulatory frameworks have been introduced and linked to a terminology of professionalism. The second argument, meanwhile, asserts that we need to imagine a new future for early years education marked by a ‘critical ecology’ of the profession. This is a future in which educators maintain an attitude of critical enquiry in all aspects of their role, assessing the genuine needs of the sector, factoring in the different political and cultural milieux that influence it, and acting to transform it.

In exploring the issues, this book begins by recording in detail the daily work of early years educators from six countries: Australia, England, Finland, Germany, New Zealand and Sweden. These case studies explore what it means to act professionally in a particular context; perceptions of what being a ‘professional’ in early childhood education means (including practitioners’ self perceptions and external perspectives); and common features of practice in each context. It moves on to analyse the wider socio-political forces that affect this day-to-day practice and recommends that practitioners act as transformative agents informed by the political and social realities of their time.