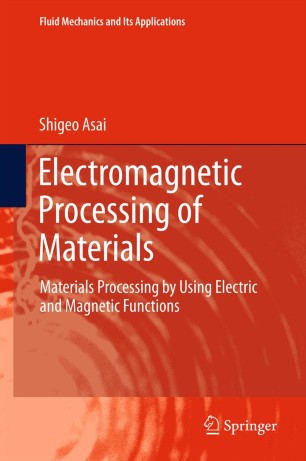 Part of the Fluid Mechanics and Its Applications book series (FMIA, volume 99)

This book is both a course book and a monograph. In fact, it has developed from notes given to graduate course students on materials processing in the years 1989 to 2006. Electromagnetic Processing of Materials (EPM), originates from a branch of materials science and engineering developed in the 1980s as a field aiming to create new materials and/or design processes by making use of various functions which appear when applying the electric and magnetic fields to materials. It is based on transport phenomena, materials processing and magnetohydrodynamics.

The first chapter briefly introduces the history, background and technology of EPM. In the second chapter, the concept of transport phenomena is concisely introduced and in the third chapter the essential part of magnetohydrodynamics is transcribed and readers are shown that the concept of transport phenomena does not only apply to heat, mass and momentum, but also magnetic field. The fourth chapter describes electromagnetic processing of electrically conductive materials such as electromagnetic levitation, mixing, brake, and etc., which are caused by the Lorentz force. The fifth chapter treats magnetic processing of organic and non-organic materials such as magnetic levitation, crystal orientation, structural alignment and etc., which are induced by the magnetization force. This part is a new academic field named Magneto-Science, which  focuses on the development of super-conducting magnets.

This book is written so as to be understood by any graduate student in engineering courses but also to be of interest to engineers and researchers in industries.