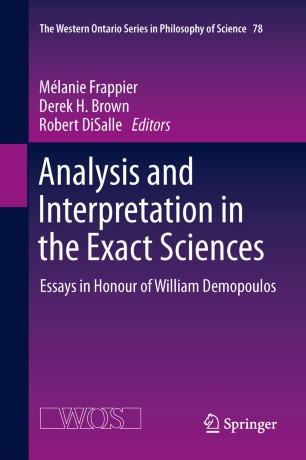 Analysis and Interpretation in the Exact Sciences

Essays in Honour of William Demopoulos

Part of the The Western Ontario Series in Philosophy of Science book series (WONS, volume 78)

The essays in this volume concern the points of intersection between analytic philosophy and the philosophy of the exact sciences. More precisely, it concern connections between knowledge in mathematics and the exact sciences, on the one hand, and the conceptual foundations of knowledge in general. Its guiding idea is that, in contemporary philosophy of science, there are profound problems of theoretical interpretation-- problems that transcend both the methodological concerns of general philosophy of science, and the technical concerns of philosophers of particular sciences. A fruitful approach to these problems combines the study of scientific detail with the kind of conceptual analysis that is characteristic of the modern analytic tradition. Such an approach is shared by these contributors: some primarily known as analytic philosophers, some as philosophers of science, but all deeply aware that the problems of analysis and interpretation link these fields together.