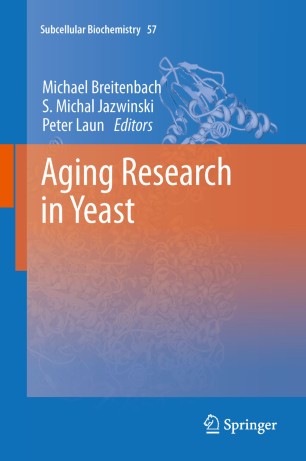 This volume includes contributions by the leading experts in the field of yeast aging. Budding yeast (Saccharomyces cerevisiae) and other fungal organisms provide models for aging research that are relevant to organismic aging and to the aging processes occurring in the human body. Replicative aging, in which only the mother cell ages while the daughter cell resets the clock to zero is a model for the aging of stem cell populations in humans, while chronological aging (measured by survival in stationary phase) is a model for the aging processes in postmitotic cells (for instance, neurons of the brain). Most mechanisms of aging are studied in yeast. Among them, this book discusses: mitochondrial theories of aging, emphasizing oxidative stress and retrograde responses; the role of autophagy and mitophagy; the relationship of apoptosis to aging processes; the role of asymmetric segregation of damage in replicative aging; the role of replication stress; and the role of the cytoskeleton in aging. Modern methods of yeast genetics and genomics are described that can be used to search for aging-specific functions in a genome-wide unbiased fashion. The similarities in the pathology of senescence (studied in yeast) and of cancer cells, including genome instability, are examined.