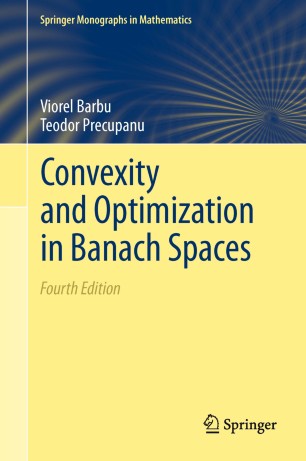 Convexity and Optimization in Banach Spaces

An updated and revised edition of the 1986 title Convexity and Optimization in Banach Spaces, this book provides a self-contained presentation of basic results of the theory of convex sets and functions in infinite-dimensional spaces. The main emphasis is on applications to convex optimization and convex optimal control problems in Banach spaces. A distinctive feature is a strong emphasis on the connection between theory and application.

This edition has been updated to include new results pertaining to advanced concepts of subdifferential for convex functions and new duality results in convex programming. The last chapter, concerned with convex control problems, has been rewritten and completed with new research concerning boundary control systems, the dynamic programming equations in optimal control theory and periodic optimal control problems.

Finally, the structure of the book has been modified to highlight the most recent progression in the field including fundamental results on the theory of infinite-dimensional convex analysis and includes helpful bibliographical notes at the end of each chapter.