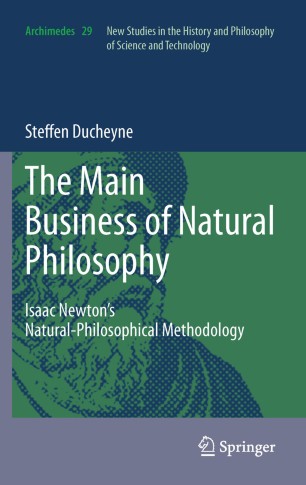 “The main Business of natural Philosophy”

In this monograph, a historically detailed and philosophical-systematic study will be undertaken of Newton's scientific methodology. It will be shown that the hypothesis that Newton was a bad or confused methodologist is beset with many difficulties and that Newton was not a simplistic inductivist nor did he believe that causes can be derived unconditionally from phenomena. Special attention will be given to Newton’s Principia-style methodology. With respect to Newton’s Principia-style methodology, it will be shown that Newton carefully distinguished between the (physico-)mathematical treatment of force and the physical treatment of force and that the former should always precede the latter in order to uncover the forces present in rerum natura more safely. In the (physico-)mathematical treatment of force, Newton explicated the physico-mathematical conditions under which, given the laws of motion, certain motions would occur exactly or quam proxime. Of course, Newton clearly focused on those motions which would be relevant in the study of the systema mundi, i.e. Keplerian motions. It will be shown that the models of Book I are not purely mathematical, but physico-mathematical instead: the idealized motions and forces of the models of Book I are iso-nomological to real-world bodies and forces and they are analyzable by the same technical concepts, i.e. Definitions I-VIII. Given these features, Newton could bridge the gap between mathematics and physics: the physico-mathematical conditions, which are structurally similar to what would become their referents in the context of Book III, are predicated under the same laws that hold in the empirical world and, given the Definitions, one could relate certain technical terms to their quasi-physical measures.