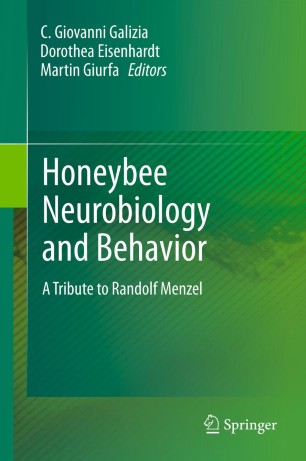 A Tribute to Randolf Menzel

Honey bees are arguably among the most complex insects on earth, both in terms of their individual behavior, and of the social organization of their societies. Furthermore, they are among the best studied insects, and have fascinated human thought since the antiquity.

In 1987 R. Menzel and A. Mercer edited a comprehensive book on neurobiology and behavior of honey bees, which was for many years the reference for scholars at large. However, in the last 25 years, research has made tremendous progress: Molecular biology and the sequencing of the genome have helped to link

molecular and neural architectures underlying behavior. Optophysiological imaging technology and multielectrode electrophysiology allowed for simultaneous recording of many neurons to study functional principles of neural networks in the bee brain. New experimental paradigms revealed amazing cognitive sophistication, showing that the bee is capable of solving problems that have been so far considered the prerrogative of vertebrates. The development of new Doppler-radar technologies has allowed to track freely flying bees over considerable distances, thus introducing new vistas in the study of bee navigation and spatial representation in the insect brain. This book covers these and other topics providing a state-of-the-art vision of honey bee biology. The most renowned specialists converge here to illustrate that the honey bee is by now an established model system for neuroscience and behavior, and to provide an inspiring outlook toward the future, including commentaries to each section that are intended as seeds for further research.

The sections social organization, communication and navigation, brain anatomy and physiology, sensory systems, genetics and molecular biology and learning and memory create both a reference work and a textbook not only for those interested in honey bees but also for entomologists at large, and for those which, in different species, try to unravel the links between neurosciences and behavior.