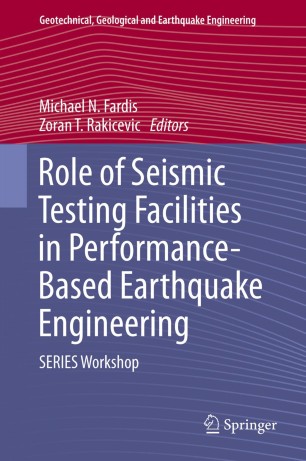 Nowadays research in earthquake engineering is mainly experimental and in large-scale; advanced computations are integrated with large-scale experiments, to complement them and extend their scope, even by coupling two different but simultaneous tests. Earthquake engineering cannot give answers by testing and qualifying few, small typical components or single large prototypes. Besides, the large diversity of Civil Engineering structures does not allow drawing conclusions from only a few tests; structures are large and their seismic response and performance cannot be meaningfully tested in an ordinary lab or in the field. So, seismic testing facilities should be much larger than in other scientific fields; their staff has to be resourceful, devising intelligent ways to carry out simultaneously different tests and advanced computations. To better serve such a mission European testing facilities and researchers in earthquake engineering have shared their resources and activities in the framework of the European project SERIES, combining their research and jointly developing advanced testing and instrumentation techniques that maximize testing capabilities and increase the value of the tests. This volume presents the first outcomes of the SERIES and its contribution towards Performance-based Earthquake Engineering, i.e., to the most important development in Earthquake Engineering of the past three decades. The concept and the methodologies for performance-based earthquake engineering have now matured. However, they are based mainly on analytical/numerical research; large-scale seismic testing has entered the stage recently. The SERIES Workshop in Ohrid (MK) in Sept. 2010 pooled together the largest European seismic testing facilities, Europe’s best experts in experimental earthquake engineering and select experts from the USA, to present recent research achievements and to address future developments.