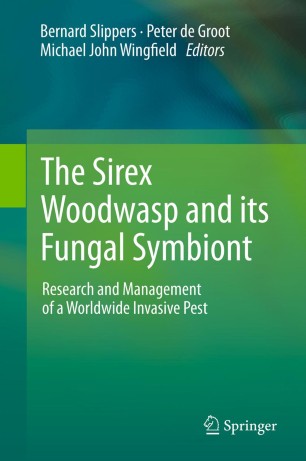 The Sirex Woodwasp and its Fungal Symbiont:

Research and Management of a Worldwide Invasive Pest

The Sirex woodwasp, Sirex noctilio, is the most important invasive alien insect pest in Pinus plantations across the Southern Hemisphere, and it now threatens pines in North America. Sirex noctilio is native to Eurasia, where it causes little damage and is better known for its fascinating biology, including an obligate mutualism with the fungus Amylostereum areolatum. The wasp first appeared outside its native range around 1900 in New Zealand, and it has subsequently spread to Australia, South America and Africa. The pest continues to spread globally and this is vividly illustrated by its recent appearance in North America.

The genesis of the book was an International Sirex Symposium held in South Africa in May 2007. This symposium recognised the growing global threat from the woodwasp and the realization that a sustained research effort would be required to deal with it. This meeting succeeded remarkably in bringing together a diverse mosaic of government, industry and academic experience from many parts of the world. The shared experience emerging from the meeting, as well as the research and management work that has been undertaken subsequently, is captured in this book.

This book covers aspects of the insect’s taxonomy, life history, host-plant relationships, population dynamics and chemical ecology, as well as the nature of its obligate mutualistic relationship with the fungus Amylostereum, its distribution, diversity and biology. There is also a focus on the development and adaptation of biological control systems using various parasitic wasps and the nematode Deladenus siricidicola. Importantly, the book contains a complete synthesis of the history and current status of the pest as well as efforts to control it in the Southern Hemisphere and in North America. Overall, this book illustrates the need for a global community effort to combat the increasing threat of invasive alien pests andpathogens to the world’s forests.