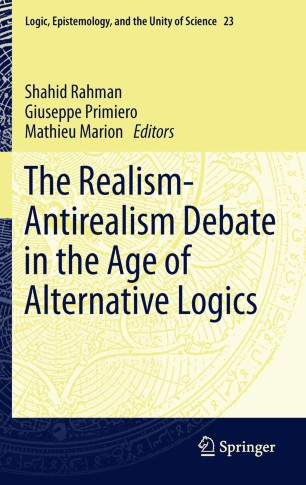 The Realism-Antirealism Debate in the Age of Alternative Logics

Part of the Logic, Epistemology, and the Unity of Science book series (LEUS, volume 23)

The relation between logic and knowledge has been at the heart of a lively debate since the 1960s. On the one hand, the epistemic approaches based their formal arguments in the mathematics of Brouwer and intuitionistic logic. Following Michael Dummett, they started to call themselves `antirealists'. Others persisted with the formal background of the Frege-Tarski tradition, where Cantorian set theory is linked via model theory to classical logic. Jaakko Hintikka tried to unify both traditions by means of what is now known as `explicit epistemic logic'. Under this view, epistemic contents are introduced into the object language as operators yielding propositions from propositions, rather than as metalogical constraints on the notion of inference.

The Realism-Antirealism debate has thus had three players: classical logicians, intuitionists and explicit epistemic logicians. The editors of the present volume believe that in the age of Alternative Logics, where manifold developments in logic happen at a breathtaking pace, this debate should be revisited. Contributors to this volume happily took on this challenge and responded with new approaches to the debate from both the explicit and the implicit epistemic point of view.

“The collection is composed of 18 chapters, covering a wide variety of topics. … the volume offers a panorama of research work done in the first decade of the twenty first century, concerning the ongoing debate about realism vs anti-realism and is, therefore, necessary reading for anyone interested in the central questions in this debate.” (Costas Dimitracopoulos, Metascience, February, 2013)