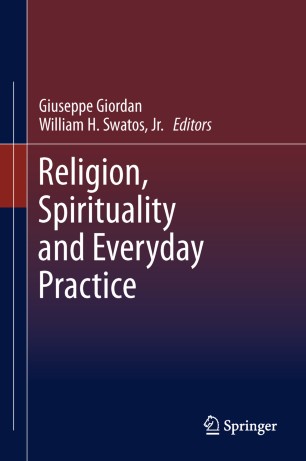 The current generation of young adults, at least in the Western world, has shown a marked tendency toward a preference for describing themselves as “spiritual” as contrasted to “religious.” This book seeks to examine the possible meanings and consequences associated with this contrast in terms of the similarities and differences that affect those who use these terms with respect to the everyday practices that they themselves employ or believe should follow from being self-defined as “religious” or “spiritual” – or not. The several chapters in this volume take up the religious-spiritual contrast specifically through investigations into practice: In what ways do people who claim to be “religious” or “spiritual” define these self-images as manifest in their own lives? How on a daily basis does a person who considers himself or herself “religious” or “spiritual” live out that self-image in specific ways that she or he can describe to others, even if not share with others? Are there ways that being “spiritual” can involve religion or ways that being “religious” can involve spirituality, and if so, how do these differ from concepts in prior eras (e.g., Ignatian spirituality, Orthodox spirituality, Anglican spirituality, etc.)? We also explore if there are institutions of spiritual practice to which those who term themselves “spiritual” turn, or if the difference implied by these terms may instead be between institutionalized and de-institutionalized expressions of practice, including but not limited to self-spiritualities.

Giuseppe Giordan is Senior Lecturer in Sociology at the University of Padua. From 2007 he has served as Secretary of the Sociology of Religion Section of the Italian Sociological Association, and from 2009 as General Secretary of the International Society for the Sociology of Religion (ISSR/SISR). With Enzo Pace and Luigi Berzano he also edits the Annual Review of the Sociology of Religion. He completed all his social science degrees at the Pontifical University of Saint Thomas Aquinas (the Angelicum) in Rome, receiving his doctorate summa cum laude in 2010. He also holds a bachelor’s degree in theology from the Theological Faculty of Northern Italy. His books in English include Identity and Pluralism: The Values of the Post-Modern Time (2004) and the edited volumes Vocation and Social Context (2007), Conversion in the Age of Pluralism (2009) and Youth and Religion (2010), in addition to articles in Implicit Religion, Social Compass, and the Review of Religious Research.

William H. Swatos, Jr. received his doctorate with examination honors in social theory from the University of Kentucky. He has served for over a decade as Executive Officer of both the Association for the Sociology of Religion and the Religious Research Association. He is a Senior Fellow of the Institute for Studies of Religion at Baylor University, editing the Interdisciplinary Journal of Research on Religion,  and teaches in the sociology faculty at Augustana College (Illinois). He is also Canon Theologian of the Anglican Diocese of Quincy, Illinois. With Kevin Christiano and Peter Kivisto, he is co-author of the text Sociology of Religion, currently in its second edition. In addition he is co-author of a text in Social Problems as well as For Democracy: The Noble Character and Tragic Flaws of the Middle Class (with Peter Kivisto and Ronald Glassman) and Icelandic Spiritualism: Mediumship and Modernity (with Loftur R. Gissurarson), as well as fourteen edited volumes, including the Encyclopedia of Religion and Society. In 2004 he assumed the general editorship of the “Religion and the Social Order” series sponsored by the ASR, with a total of ten volumes completing publication between then and 2011.