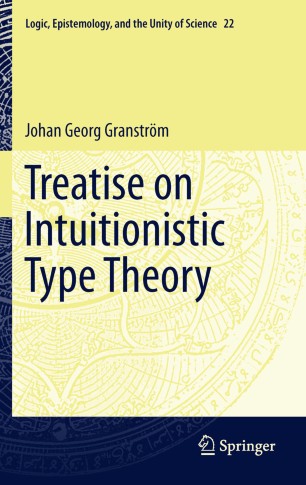 Part of the Logic, Epistemology, and the Unity of Science book series (LEUS, volume 22)

Intuitionistic type theory can be described, somewhat boldly, as a fulfillment of the dream of a universal language for science.  In particular, intuitionistic type theory is a foundation for mathematics and a programming language.  This book expounds several aspects of intuitionistic type theory, such as the notion of set, reference vs. computation, assumption, and substitution.  Moreover, the book includes philosophically relevant sections on the principle of compositionality, lingua characteristica, epistemology, propositional logic, intuitionism, and the law of excluded middle. Ample historical references are given throughout the book.

Johan G. Granström (1977) holds an Uppsala doctorate in mathematical logic (2009). He had the privilege of having Em.Prof. Per Martin-Löf, the father of dependent types, as doctoral supervisor (2003-2009), along with Prof. Erik Palmgren, a renowned expert in constructive mathematics.

Dr. Granström has been a short-term research fellow at Ludwig-Maximilians-Universität München (2006-2007) and a research associate in formal methods for MDA at King’s College London (2009). Before entering into doctoral studies he was employed in the computer industry as systems developer, consultant, and software architect (1998-2003).  He worked as Systems and Solutions Architect at Svea Ekonomi (2009-2011) and is currently employed by Google, Zürich (2011- ).