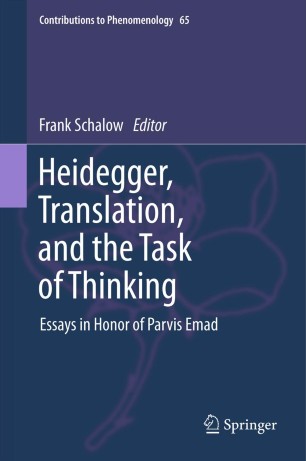 Heidegger, Translation, and the Task of Thinking

Essays in Honor of Parvis Emad

Part of the Contributions To Phenomenology book series (CTPH, volume 65)

Numerous volumes have been written on the philosophy of Martin Heidegger, and new translations of his writings appear on a regular basis. Up to now, however, no book has addressed the connections between Heidegger's thought and the hermeneutic methodology involved in translating his works - or any other text. Gathering essays by internationally recognized scholars, this volume examines the specific synergy that holds between Heidegger's thinking and the distinctive endeavor of translation.

Heidegger, Translation, and the Task of Thinking:  Essays in Honor of Parvis Emad offers scholars and students alike a rare journey into the insights and intricacies of one of the greatest philosophers of the twentieth century. The book also pays homage to Parvis Emad, Professor Emeritus of Philosophy at De Paul University, founder of the journal Heidegger Studies and a renowned translator of Heidegger’s writings.

Heidegger, Translation, and the Task of Thinking:  Essays in Honor of Parvis Emad provides a uniquely focused perspective on Heidegger's thought, and delves into the strategies and controversies that attend all attempts to translate his most complex and challenging texts, including his seminal works Contributions to Philosophy and Mindfulness. Accordingly, this book will be of great interest and benefit to anyone working in the fields of phenomenology, hermeneutics, or Heidegger studies.