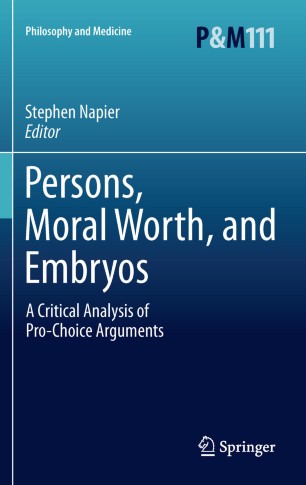 Persons, Moral Worth, and Embryos

A Critical Analysis of Pro-Choice Arguments

Part of the Philosophy and Medicine book series (PHME, volume 111)

“Bioethicists have achieved consensus on two ideas pertaining to beginning of life issues: (1) persons are those beings capable of higher-order cognition, or self-consciousness, and (2) it is impermissible to kill only persons. As a consequence, a consensus is reached regarding the permissibility of both destroying human embryos for research purposes and abortion. The present collection aims to interact critically with this consensus. Authors address various aspects of this ‘orthodoxy’. Issues discussed include: theories of personhood and in particular the role of thought experiments used in support of such theories; the notion of an intrinsic potential and the moral relevance of having one; new formulations of the virtue argument against abortion rights; four-dimensionalism and abortion; the notion of moral status and who (or what) has it; scientific accounts of what a human being is, as well as addressing empirical evidence of fetal consciousness; and analysis of the public policy implications given the epistemic status of pro-choice arguments. Given the issues discussed and that the arguments in critical focus are fairly new, the collection provides a novel, comprehensive, and rigorous analysis of contemporary pro-choice arguments.”