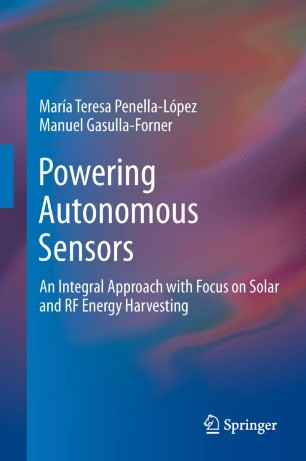 An Integral Approach with Focus on Solar and RF Energy Harvesting

Autonomous sensors transmit data and power their electronics without using cables. They can be found in e.g. wireless sensor networks (WSNs) or remote acquisition systems. Although primary batteries provide a simple design for powering autonomous sensors, they present several limitations such as limited capacity and power density, and difficulty in predicting their condition and state of charge. An alternative is to extract energy from the ambient (energy harvesting). However, the reduced dimensions of most autonomous sensors lead to a low level of available power from the energy transducer. Thus, efficient methods and circuits to manage and gather the energy are a must.

An integral approach for powering autonomous sensors by considering both primary batteries and energy harvesters is presented. Two rather different forms of energy harvesting are also dealt with: optical (or solar) and radiofrequency (RF). Optical energy provides high energy density, especially outdoors, whereas RF remote powering is possibly the most feasible option for autonomous sensors embedded into the soil or within structures. Throughout different chapters, devices such as primary and secondary batteries, supercapacitors, and energy transducers are extensively reviewed. Then, circuits and methods found in the literature used to efficiently extract and gather the energy are presented. Finally, new proposals based on the authors’ own research are analyzed and tested. Every chapter is written to be rather independent, with each incorporating the relevant literature references.

Powering Autonomous Sensors is intended for a wide audience working on or interested in the powering of autonomous sensors. Researchers and engineers can find a broad introduction to basic topics in this interesting and emerging area as well as further insights on the topics of solar and RF harvesting and of circuits and methods to maximize the power extracted from energy transducers.